Kaicho David Farzinzad was born just north of Tehran, Iran in 1962. From age seven he was involved with sports, principally soccer and Olympic wrestling, and became attracted the practice of martial arts. Kaicho captured the title of junior youth champion of Olympic wrestling in Tehran from the age of nine until he was 12. Kaicho experimented with the practice of Kung Fu briefly but later was captured by the Kyokushin style of karate. At the age of twelve, Kaicho decided to dedicate himself to Kyokushin and would forego other sports in order to practice the art seriously. Through his hard work and dedication, Kaicho excelled in the art and captured his first national bare knuckle karate championship at the age of 16. Kaicho would go on to

win 10 consecutive national championships by the age of 26. Additionally, Kaicho took two national titles in Kyokushin kata competitions and placed an impressive 10 in a national competition open to all styles (many of which focus principally on the practice of kata). During that period Kaicho assumed a leadership role in Iran’s Kyokushin community, having become the manager of Iran’s central dojo at the age of 17. Kaicho became a candidate for two World Karate Tournaments held in Japan in 1984 and 1987 but could not compete due to the Iran – Iraq war and his military service obligations.

In 1989 Kaicho Farzinzad traveled to Japan to train under Sosai Oyama. Within a brief period of time Sosai Oyama appointed Kaicho

as Iran’s representative to the International Kyokushinkai Organization (IKO). In 1990 Kaicho represented Sosai Oyama and the IKO Honbu (headquarters) as a fighter in Japan’s national championship. Later that year Kaicho returned to Iran and founded the Iran Kyokushinkai Karate Association and opened the central dojo for the Middle East region in Tehran. In 1991, Kaicho coached the Iranian national team and led them to the 5th World Championship Tournament in Japan.

During his tenure as his country’s representative to the IKO, Kaicho rehabilitated Iran’s Kyokushin organization and turned it into the most active IKO branch in the world. Kaicho instituted a strict meritocracy that included the traditional black belt promotion system and which ended corruption and illegitimate certifications. Kaicho convinced Sosai Oyama to create a Middle East branch position and was singularly responsible for identifying the Middle East chairman based on his experience with the member countries and familiarity of the politics involved.

technical knowledge and competitive history, overruled IKO policy and awarded Kaicho his 5th Degree of mastery. Until that moment, a candidate had to be at least 35 years of age to be eligible for such a promotion. Kaicho Farzinzad is the first and last person to be awarded the 5th degree from Sosai Oyama under age 30, making him the youngest 5th Dan in Kyokushin history. Concurrently, Kaicho became one of the youngest Kyoshi (Shihan) promoted by Sosai Oyama and was subsequently honored for his hard work and commitment to IKO with one of the most coveted Kyokushin certifications, awarded by Sosai Oyama to only a handful of elite practitioners worldwide, authorizing the training of instructors, judges and referees for competition at the international level.

Kaicho was subsequently named the technical director for the Middle East region and facilitated several national and regional tournaments. Most notably, Kaicho was able to negotiate between the Arab states and Israel which culminated in their joint participation in a World Tournament. At that time, Kaicho simply stated that any “Kyokushin fighter who lives on the earth deserves

to participate in the World Tournament competition. If one side thinks they have something to prove, let them do it in the ring the Kyokushin way. The responsibility of a true teacher, is to treat everyone fairly and equitably, regardless of their race, religion or nationality.”

During this period, the Iranian revolution came to pass and with it new challenges for Kyokushin and its members. Under the new regime, ladies were expelled from many public activities including organized sports. Committed to his belief in the value of women in society and the need for freedom, Kaicho reinstated public Kyokushin practice for women in his headquarters. This public support for women’s freedom subjected Kaicho to much harassment and intimidation from the new regime and 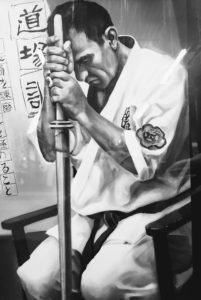 its supporters. As a result Kaicho was left without any government support, faced spurious interrogations and, on one occasion, had his headquarters locked and sealed by the authorities. Notwithstanding, Kaicho continued his hard work as was rewarded by having his headquarters featured in the 1994 IKO calendar that was distributed in Japan. It was to be the last official IKO calendar under Sosai Oyama as he passed away that year. Kaicho’s woman’s program grew to be so successful that one of his students (and wife) was allowed to travel to Japan and succeeded in attaining her Third Dan from Sosai Oyama. In accomplishing her promotion, Sensei

Farzinzad became the only woman from the Middle East, and one of a handful of women in the world to complete a thirty man kumite – a grueling test in which the candidate has to fight thirty men in a row under the traditional bare knuckle format.

Upon her return to Iran Sensei Farzinzad excelled as an instructor under Kaicho’s supervision and was able to develop and award nine women their black belts. When Kaicho left for the United States, the Iranian Kyokushinkai program under his control had over 8,000 members.

Kaicho cares very much about Kyokushin, and writes The Sword of Truth to express his opinions, concerns and philosophy.

On September 10, 2012 Kaicho was inducted into the World Martial Arts Hall of Fame.

Currently, Kaicho is the director IKU and instructs students in Kyokushin at Avon Karate in Avon, CT. Kaicho is married to Shihan Nahid Farzinzad and has 3 children, all whom have black belts.